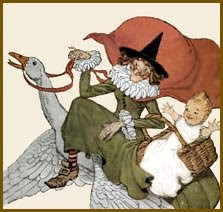 Jack and Jill
Jill and Jack
Went to Donut Shack,
To fetch a dozen crullers.
Chocolate supreme
All loaded with crème,
In all assorted colors.

Jill watched Jack
Have a heart attack,
And went to dial 9-1-1.
But before the call,
She stopped in the hall
To finish her cinnamon bun.

Jack and Jill
Went to the hospital,
Where he had an operation.
After his brush with fate,
Now they’re watching their weight
And eat in moderation.

Georgie Porgie
Georgie Porgie, puddin' and pie,
Eats all kinds of cheaties instead of his Wheaties.
Was anybody shocked when he went to the doc,
And diagnosed with Type 2 diabetes?

Humpty Dumpty, sticking to plan,
Has lost 50 pounds since his diet began.
All the king’s horses and all the king’s men
Can’t believe Humpty is quite the same man.

Goosey Goosey Goose
Goosey Goosey Goose, always making some excuse.
“I’m too tired, I’m too sore, I can’t work out anymore.
I’ve got houseguests, I’ve got a job, my kids are underfoot.”
And then doesn’t understand it when all the pounds stay put.

Blog Blog Jack Sh*t
Blog blog Jack Sh*t, have you any posts?
Yes sir, yes sir, I’ve got your daily dose.
One that’s pretty stupid, one that’s not-so-great,
And one to help the people who’re trying to lose some weight.
Blog blog Jack Sh*t, why are your posts so weird?
Cuz I’m feeling giddy now that pounds have disappeared.
Posted by Jack Sh*t, Gettin Fit at 7:34 AM