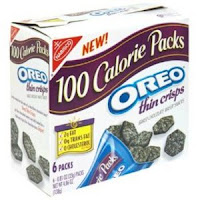 I realize that I’m fighting a tidal wave of popularity by ranting against 100-calorie packs. Food manufacturers and grocery stores seem to be doubling down on them–don’t be surprised to see a 100-calorie snack aisle in your neighborhood store any day now. But besides offering a no-brainer approach to portion control, there’s not much good you can say about these craptacular snacks. Here’s a hundred reasons to leave ‘em on the store shelves…