WHO IS JACK SH*T?

Who is the man
That passes on advice with his bloggin', man?
(Sh*t!)
Can ya read it?

Who's the cat that won't pig out
When there's tasty treats about?
(Sh*t!)
Right on plan. 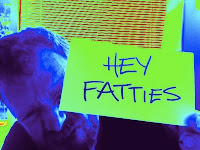 Bad Wayne
Wherever you find a bad weigh-in, chances are Bad Wayne will be nearby. He encourages Jack to succumb to “snack attacks”, consume entirely too many adult beverages and melt cheese on everything (including melted cheese).

The Jack Sh*t Players
Made up of Tom, Index, Bird, Goldie and Pinky, this versatile troupe does a lot of work in community theatre and off- off- off- off-Broadway performances. Bird’s one-man show “You Drive Like a Retard” has toured extensively over the southern U.S. 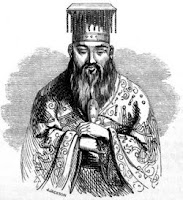 Confush*t
The voice of reason at JSGF, this wise and venerable character regularly espouses wisdom and bad puns as well as showing up in parables from time to time. 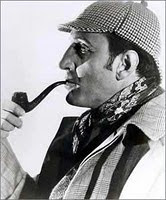 Sh*tlock Holmes
When there’s a mystery afoot, such as “Why can’t I lose weight?” or “Why do they keep putting new stuff inside of M&M’s?”, Sh*tlock Holmes is on the case with his intrepid assistant, Fatson. 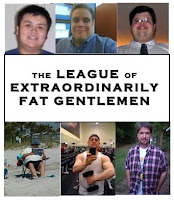 The League of Extraordinarily Fat Gentlemen
What happens when you bring the weight-loss blogging community’s most distinct voices together in one room? Fireworks, that’s what! The original League consisted of Jack, Tony, Gay Tony, Fat Daddy, Sean and Steven. Today, the line-up includes Mizfit, Mrs. Fat Ass, Fitarella, Suzi, TJ, Mishe, Karen and Mrs Fat-Ass. TOM is an honorary lifetime member of the group, but is currently in hiding. 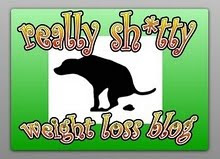 Really Sh*tty Weight Loss Blog Award
This blog used to be cluttered with all kinds of awards, but now I recognize only the very first award I received. It’s true that I created it myself, but sometimes it’s nice to remember that I believed in myself before anybody else believed in me. 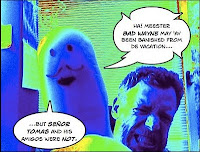 The Bad Wayne Players
Inspired by the success of the Jack Sh*t Players, this group has not been able to replicate the success of its opposite number. Their show “Yes, Dammit. I Would Like Fries With That!” closed 20 minutes into opening night.