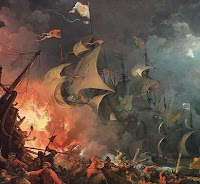 When Spanish Conquistador Hernando “Corky” Cortez landed in Mexico in 1519, he gave a startling order: “Burn the ships.” Some historians argue that he just didn’t want to pay the docking fees at the marina, but most have come to the conclusion that he was so committed to his mission that he didn’t want to allow his men (or himself) the option of returning to Spain... the option of failure.

I’ve been taking a “burn-the-ships” approach with many aspects of my current weight loss campaign. I’m getting rid of excuses that get in my path, and I’m chasing away temptations that I know are just too difficult for me to resist.

I used to buy snacks for my daughters that, more often than not, I would wind up munching on while watching a ball game on TV.

The fridge by my desk at the office was once stacked and packed with sodas.

I found myself eating dessert right before bedtime.

All too often, I was making poor choices at restaurants.

None of us are made of steel. We can’t resist temptation indefinitely. What we can do is take away as many of the hurdles and enticements that get in the way of our weight loss success as we possibly can.

When I decided to stop drinking coffee a couple of weeks ago, there was an almost-full container of Almond Toffee coffee creamer in the fridge. I left it in there a couple of days, but I know the way my mind works: “Well, that stuff’s just going to go to waste if I don’t drink it. Maybe a cup of coffee just the weekends… that’d be all right.”

When you start making deals with yourself over food, it’s time to burn the ships.

Glug, glug, glug… down the drain went the coffee crap.

Family won’t like it if you quit buying ice cream? I’ve got news for you: they’ll get over it. My daughters were livid when I quit bringing home their favorite chips. Tough t*tty, said Jack Sh*tty. Them boats have been torched.

And the excuses. Maybe more important than the temptations, you’ve got to take away the excuses that make taking care of yourself less of a priority than taking care of all the other areas of your existence, all the other duties and responsibilities that fill your days. This is your life, and it’s high time that you give yourself the opportunity to be the person you want to be, that you know deep down you’re on the road to becoming.

Burn the ships. Get rid of anything and everything that could possibly cause you to fail. Burn the ships. Take every excuse off the table, and leave every cop-out and justification out back with the trash. Leave yourself no choice but to succeed… and don’t be surprised when that’s just what you do.

Against all odds, Cortez’s men conquered the Aztecs and were victorious where others had been unsuccessful for six centuries.

It’s hard to open the fridge door when your back’s against the wall.
Posted by Jack Sh*t, Gettin Fit at 8:00 AM