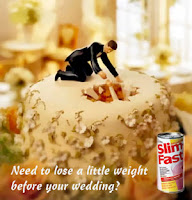 Instead of my usual weekend sacred service (the Sunday morning weigh-in), I spent the weekend at my niece’s wedding four hours away. It wasn’t the train-wreck it could have been, but it was bad enough that I’m skipping my weekly hop-on-the-scale this week. Why? Call me Jack S*lt.

Snacked on semi-healthy (but salty) chips and pretzels on the car ride, didn’t drink enough aqua (even though I brought a big jug), nibbled a little at the reception, then went out with entire family to a Mexican place they all love (but I think is kind of mediocre). Broke down and ordered a beer, then had a little “What the hell?” moment with the greasy chips and salsa.

I wish Mexican food in this country resembled, oh I don’t know, food in Mexico. Every time we travel south of the border, we encounter all kinds of fresh and exotic fare, and rarely is any of it smothered in cheese and served with prison-style glob of beans. I split an order of extra-salty veggie fajitas with my wife Anita, and somewhere along the way had another beer. I was okay with the beer because they weren’t huge glasses and, when I start, I’m capable of putting away a lot of beer.

We went down to the fitness area later that night, while my mother and my daughter Pisa checked out the pool. I farted around on some of the equipment, but my heart (and stomach) just wasn’t into it.

Next morning, I made better choices at the complimentary breakfast buffet (featuring make-your-own-waffle station). I had oatmeal with sliced banana, juice and an apple. Snacked a little more on the drive home (did not plan well for car trip) and got back on track once I returned home. Ate better and exercised for couple of hours in the afternoon. Still, I can feel all that water weight clinging to me like saran wrap.

On the drive home, I was doing a bit of thinking about celebrations and how they so often knock us off skew with our weight loss plans. You tell yourself it’s okay because it’s a special occasion, and then a couple of nights later an old friend is visiting… or it’s a co-worker's birthday… or a new restaurant opened that everyone’s raving about… or they put Milky Ways in the vending machine. There’s always something to celebrate.

I don’t feel too bad about how I did this weekend… but I don’t necessarily feel like weighing in either.