The Ant and the Half-Ass Hopper 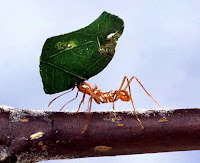 There’s an old story about The Ant & The Grasshopper, but this is not like that at all.

There are no similarities, other than the name sounds a little similar.

And there’s an Ant in both of the stories.

Anyway, once there was this industrious ant. Personally, I don’t know why ants are always so industrious. Did you know that the lifespan of an average ant is 45 to 60 days? If I were an ant, I’d work for a few weeks, but then I’d want some time off to start enjoying myself a little, cuz y’know… life is short.

Anyway, this nameless Ant (another interesting ant fact: most ants don’t have names) did a workout every day. He would lift 60 milligrams, which equals out to… lemme see… 0.00212 ounces. Well, that’s not very impressive, is it? I could lift that with one hand. The pink barbells at the gym weigh 2 and a half pounds, and sometimes I use one in each hand. That’s lame, Ant!

What? How much does the Ant weigh? Well, it’s hard to get a good Ant weigh-in because some scales won’t even register a number when an ant steps on it. Google it? Google doesn’t know everything, you know!

But what about the Half-Ass Hopper? When does he come into this story? Well, right about now, as it turns out. The Half-Ass Hopper hopped around all through the week, doing half-ass workouts that looked like real workouts and actually caused him to break a little bit of a sweat, but didn’t really get much accomplished when you really got down to it.

“It is not enough to be industrious; so are the ants. What are you industrious about?”
–Henry David Thoreau 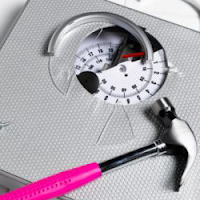 Suffering from some scale technical difficulties over here...
Posted by Jack Sh*t, Gettin Fit at 5:00 AM