I hear it from time to time, that folks stumble across this blog and are a little put off by the potty humor and the fact that I’m often taking potshots at this struggle that we’re all struggling with, this rock-littered road that has no finish line (I almost said “rocky road” but I didn’t want to make you hungry).

I understand it. Really, I do. 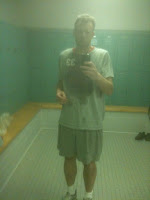 out of sorts I was sixteen months ago when I was pushing 300 lbs.

They don’t realize that I named this little patch of sunshine “Jack Sh*t, Gettin' Fit” because of a line I jotted down as I was preparing to begin this journey: “People who think losing weight is easy don’t know Jack Sh*t.”

For years, I’ve been a big-time yo-yo dieter. I’d manage to lose large amounts of weight, and then pack the pounds right back on. I can’t tell you why, have no way of explaining that kind of self-destructive behavior. Maybe it’s bad habits or just faulty wiring up in my head. Whatever the reason, I’d always gain it back… and then a little bit extra.

And as I got older, I found that I couldn’t flip the “losing” switch like I once could. I’d start a diet with the best of intentions, then find myself spitting and sputtering by week’s end. I couldn't catch the spark to start the fire…

Let me tell you something: I’m a big believer in the power of these blogs.

At my lowest point, when I felt like I was approaching last-chance territory, I reached out and connected with a couple of them. It was an eye-opening experience, a life-changing awakening.

I found that you could backtrack a blogger’s entire journey, see the person that they started off as and the one they’re on the way to becoming. Every blog isn’t like that, you know, but the ones that are have such a force about them, such an energy… you can just tap in and feel something powerful circulating through you.

I get a real kick out of making you snort and giggle, and I like it when you’re entertained by my funky act, but I do want you to understand that I’m a different person now than I was before, a better person than I was before.

Don't take that the wrong way either. I don't think overweight or obese people are worse that thin or fit people. I'm just saying that I'm better... I feel better, feel healthier, feel 10x more energized, than I did in my dark days.

And I want you to understand that the very same opportunity is there for the taking for you.

It will take hard work and smart choices. It will take a lot of sweat and sacrifice. It’ll take commitment and it’ll take time.

But if you’ll find some way to stick with it, find something that inspires you to keep going and, well… keep going, then I think you’ll be a success, so matter what number that scale blinks back at you.

And if you think this journey is impossible, then I just have one thing to say to you…