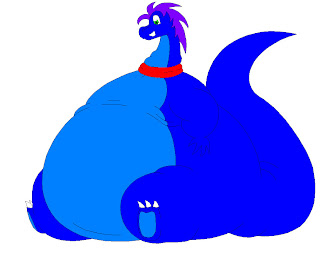 Puffy, the tragic draggin’ ass, lived life obese
And ate and snacked in his Lazy-Boy
While he watched his health decrease.
Little Jackie Sh*tter got on Puffy’s case,
And did his best to lead him to a healthy living place. Oh!

Together those two plotted to do something about his mass.
Jackie made a plan to work on Puffy’s gigantic ass.
Exercise and nutrition, have become the big man’s friend,
And now he gets excited whenever he weighs in. Oh!

No one lives forever (though that is Jackie’s plan),
But livin’ longer’s easier when you’re a healthy man.
Puffy learned his lesson: good health you can’t ignore.
And Puffy plans to be a healthy person forevermore.

His head is held up proudly, he looks good in his clothes.
Puffy no longer checks a mirror to see if he’s got toes.
He wakes up with lots of energy; his future’s not so gray,
And Puffy the magic weight-loss guy’s ready for a brand new day. Oh…

Puffy, the tragic draggin’ ass, lived extra wide,
But discovered he didn’t have to, his fate his to decide.
Puffy, the magic weight-loss guy, finally broke free.
And frolicks in the autumn mist in a land called Healthy Me.
Posted by Jack Sh*t, Gettin Fit at 8:00 AM