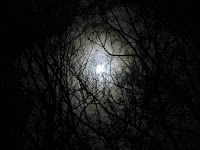 Bear with me, because I don’t use this space as a daily diary very often. I started to just knock out a silly post because, frankly, that’s what I most get a kick out of doing. However, it just didn’t seem right to do that, considering everything that’s been going on around here…

Just to bring you up to speed, my wife Anita underwent emergency eye surgery a few weeks ago. During the week and a half she spent on her side recuperating, she became convinced that there was a hole in her retina. She went to the doctor a couple of times, but they suggested waiting and seeing how it progressed. Well, it progressed and progressed, to the point where she had to go in for a second emergency procedure. It’s easy to get mad at doctors, but it’s not so easy to find their car in the parking lot and key it up (hint: it’s usually a BMW).

The scary thing (well, let’s face it… there are lots of scary things when it comes to cutting around on your eyeball), is that this is the same road she went down with her other eye. A dozen or more surgeries before she completely lost her vision. So there’s been a little bit of a “freak out” factor this go-round.

It’s still too early to say everything’s going to be fine, but she’s back on her side, trying to remain as immobile as possible for at least a week while her eye heals.

As for me, I’m trying to keep her head screwed on while also trying to keep our house from falling apart. Laundry’s been the biggest hurdle, but I have a new strategy: I’m going to start throwing away all the dirty clothes and buying exact duplicates to replace them with. Yes, it’s a lot of work, but think how much I’ll save on laundry detergent!

Exercise has gone out the window for the most part, partly because there’s no time and partly because… well, I find it really difficult to tell the person I love most on this earth that I’m going out running while she’s stuck in one position in bed.

Anyway, thanks so much for your thoughtful comments, supportive emails and warm wishes. Blogging can’t be much of a priority right now, but I’ll be around as much as possible given the circumstances.