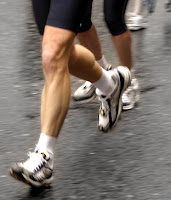 Maybe you don’t have the right shoes. I thought that there was really no difference in what you wore on your feet, but I was slipping and sliding all over the place when I jogged in my penny loafers.

Maybe you’re worried about the fact that running down the street is the equivalent of a blacksmith repeatedly pounding on your knees with a mallet.

Maybe you don’t have “a runner’s mindset,” which I define as “having something seriously wrong with you.”

Maybe you’re confused about the various running programs out there to help you build up your running muscles. I can’t do anything about your footwear, kneebones or prescribing you something that will allow you to experience the elusive “runner’s high,” but I can explain the nuances of the different running programs out there so that you can make an informed choice about what’s best for you.

Next on our list is C25K, which is spelled the same but pronounced “Couch to 25K”. Be careful not to get the two confused.


Fading in popularity due to a weak economy, the C2401K program is designed to benefit you “farther down the road”. *

If you’re strapped for time, the C2.5K (“Couch to .5K”) program can be completed during a television commercial.

The C25KKK is… okay, better to just “skip” over that one.

The C2Y2K was all the rage a decade or so ago, but you don’t hear much about it anymore.

The C25KN22, popularized by the marvelous MizFit, requires you to run in a tutu.

With the C25KO program, a professional boxer comes over and punches you in the gut whenever you stop running.

The C2K-Mart program isn’t really that good, but for the next fifteen minutes, it’s 25% off.

The 5K2C program (which I actually invented and did over the last few months) is noteworthy because it starts you off running 5K and eases you back down to sitting around on the sofa.

Speaking of running, don’t forget to get out this Sunday and run yourself a 5K like my buddy Kelly and I are doing. Kelly’s doing it for a good cause, and I’m doing it because I’m a sucker for a good cause.