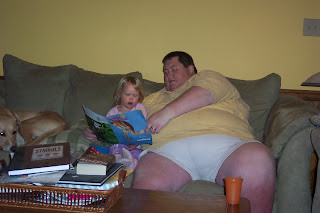 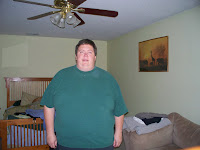 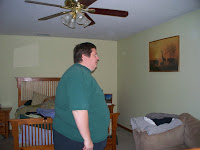 
Imagine: you’re over 500 lbs, you’ve lost your job as a direct result of your morbid obesity and you can’t watch your 2-year-old daughter play in the yard without falling asleep where you sit.

Being fat is one thing. Being a father, well… that’s a game changer. At least it is for Tom, my lone male “Bodfather” family member.

And before you start feeling all sorry for him, listen to this: although he’s been overweight practically his whole life, Tom’s already lost nearly 100 pounds on his current weight-loss journey. He’s already seen the positive changes that dropping major pounds can bring, and he’s committed to changing his ways, even though his progress has petered out, his success has stalled. He needed a “Bodfather” kick in the pants…

At 38, he’s well aware that time’s not necessarily on his side. Genetics did him no favors either; both of Tom’s parents are overweight, and so is his brother. But there’s good news on the family front: Tom’s sister has lost a lot of weight in the last couple years and has even run in a marathon. For Tom, she’s proof that bad genetic cards can be played into a winning hand.

There’re a couple of things that have lit a fire up under Tom these days, that have pushed him into that now-or-never territory where he currently resides.

The first came a year and a half ago when his wife and parents held their own intervention about the sleep apnea that had cost him his job and the obesity that threatened his health and future.

“They convinced me to talk to a doctor about gastric bypass or lap band surgery,” Tom told me. “I didn’t necessarily want to, but knew what my health situation was and didn’t really want to leave my daughter without a dad.”

At the initial consultation with the physician, Tom was told that he wasn’t eligible for surgery, at least not until he had lost at least 75+ pounds.

“I couldn’t believe it,” says Tom incredulously. “I was too fat for weight loss surgery.”

The doctor referred him to a medically supervised weight loss program, and Tom went into it with a newfound determination to change his life as well as a mission not to have to go back to the doctor for the weight loss surgery.

The second motivating factor for Tom is that daughter that he got yelled at by his wife for not watching in the yard. Falling asleep while keeping an eye on her was certainly unsafe, but Tom also understands the other danger he’s putting her in. He knows that the statistics say that a child with one overweight parent has a 50% chance of being overweight, and that’s a legacy he’s not comfortable handing down to his little girl.
Tom doesn’t want to go under the knife, but more than anything else, he wants to be around for his little girl. Wants to be able to run around at the park with her or ride bikes or do any of the things that daddies do with the little girls they love so very, very much.

I’m choking up a little as I type these words, because I simply can’t imagine not being able to be the kind of father I want to be to my own daughters. I can’t comprehend the fear and pain that must weigh on Tom every day of his life, the trepidation that runs through his mind when he holds that oh-so-little hand in his.

So we’re going to the mattresses, me, you and Tom. He’s pledged to make some big changes in his life, and nobody has any better reason to succeed.