Bodfather: Last, But Not Least 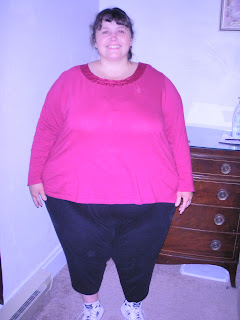 When I began this “Bodfather” series, I went into it with a vague idea of the kind of person I wanted to participate in the project.

Someone with a huge hurdle in front of them.

Someone who maybe didn’t get the support or encouragement they needed to succeed.

Someone whose story might make others sit up and take notice.

My original idea was to just go with one individual, but after receiving over 100 interested applicants, I expanded it out to four.

Then I heard from Billie. At 400+ pounds, this thirty-something year-old homeschooling mom realizes that this is a make-it-or-break-it point in her life. But it wasn’t the amount of weight she’s looking to lose that convinced me that I wanted to be a part of Billie’s journey; it was her unflagging spirit that captured my imagination.

“I am fully and painfully aware of, at all times, the limitations placed on me because of my size,” she told me recently. “About a year ago, when I was working out pretty steadily, I was walking into the Y when I heard a little girl say to her mom, ‘Mama, what did that woman do to her body?’

“I wish I had turned around and answered that little girl. Not harshly at all–she really wanted to know. And I hope her mama told her. I hope she didn’t just say, ‘Shhh–don’t say that honey, it’s not nice.’ I hope she told her all about how important it is to stay active, and eat your fruits and veggies, and not just eat because it tastes good and you want some more or because you’re sad/happy/angry.

“I hope she told her that just because I was bigger didn’t mean that I was any different from anyone else, that what mattered most when it came to people was what was on the inside, that someone can have a outwardly beautiful appearance and be unbearably ugly inside.”

Billie may be big, but she's been blessed with  thick skin, so she tries to live her live with as much humility and good grace as possible. She’s used to being pointed at, giggled at, smirked at. She may not like it, but she tries not to let it get her down.

“I am not particularly sensitive about my weight, or even the word fat,”, she says. “It’s simply an adjective. It’s the state I’m in now, not who I am. And I’m really okay with that, because I am doing what I can to move in the right direction.”

I’d like to take credit for creating the spark that’s slowly turning into a raging inferno inside of Billie, but I think I’m more of a witness than a catalyst. From the very first moment of our ongoing communication, Billie’s been more gung-ho about her weight-loss mission than anyone I’ve ever seen. She wants it badly, and she wants it now.

As Shakespeare once said, “What’s past is prologue.” Billie’s writing a new, brighter future for herself. She’s even started her own blog in order to document her successes and setbacks. She knows she's got a long road in front of her, but she’s ready... check that... she’s eager to get going.

Me? I can’t wait to see how her story turns out…


Posted by Cole Walter Mellon at 6:26 AM