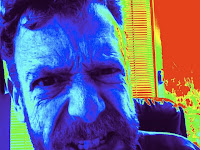 SO MAD ME AM FUMING.

SO MAD ME AM SPUTTERING AND SPITTING.

SO MAD ME HAVE FORGOTTEN BASIC RULES OF GRAMMAR.

SO MAD ME HAVE HIT SHIFT KEY SO HARD THAT IT AM WEDGED DOWN THROUGH THE KEYBOARD AND INTO THE DESK.

MADDER THAN A BOX OF FROGS.

MADDER THAN A ONE-LEGGED WOMAN AT IHOP.

MADDER THAN A GUM TREE FULL OF GALAHS (THAT’S FOR MY AUSSIE POSSE…WHATUP, AMERICANS OF THE SOUTHERN HEMISPHERE!).

MAD THAT I SQUANDERED SO MANY YEARS SOFT IN THE HEAD AND MUSHY IN THE MIDDLE.

ANGRY THAT I RISKED MY HEALTH AND WELL-BEING BY BEING STUPID AND WEAK-WILLED, FALLING INTO WHAT WAS FAST AND EASY, AND IGNORING ALL THE THINGS THAT I KNEW AT THE TIME WERE HUGELY IMPORTANT.

FURIOUS THAT MY LACK OF GUTS LEAD TO A LOAD OF GUTS.

“What are you so mad about?” asked my wife Anita, carrying a bundle of old board games under her arm.

“You’re sitting there gritting your teeth and pounding on the keyboard,” she said. “And what have you done to the “shift” key?”

“Let me guess: you’re sitting there being angry because you didn’t lose this weight five, ten, twenty years ago, right?”

“Look honey,” she smiled. “You just gotta realize stressing about the past isn’t important, necessary or good for you. You need to let go of all those unhealthy emotions just like I’m letting go of all these board games that have been cluttering up the hall closet.”

“Well, somebody busted the Pop-O-Matic bubble…”

“Pisa and I needed the die out of there for another game,” I explained. “I think I can fix it if I can find another die… and figure out some way to make a clear plastic bubble… waitaminute. You’re chunking MOUSETRAP!?!”

“I’ll tell you what,” she said opening the box. “If you can build a mousetrap out of this plastic boot, six marbles, some pick-up stix, two toy penguins, a Monopoly car, three checkers and half a deck of cards, we’ll keep it.”

“I couldn’t make a mousetrap when the game was brand new,” I admitted sheepishly “Whoa, Pisa’s gonna be mad that you’re throwing away ‘Pretty Pretty Princesses’.”

“You’re the one that liked ‘Pretty Pretty Princesses’!” exclaimed Anita.

“It always made me feel so pretty.”

Anita rolled her eyes, shook her head and hauled her armload out to the curb.

You can't change your past, so there's no reason to be mad about it.

I may not be able to build a mousetrap, but I suspect I can build a bridge.

Build a bridge and get over it.
Posted by Jack Sh*t, Gettin Fit at 6:41 AM

Email ThisBlogThis!Share to TwitterShare to FacebookShare to Pinterest
Labels: diet, mad, the past, weight loss