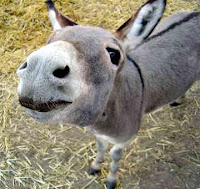 My Grandpa Noah once told me about a donkey he had back when he and my grandmother lived on a farm in rural Tennessee. He had this really ornery donkey named Donkey Odie who managed to fall down into a well one day. Donkey Odie cried and cried, but Grandpa Noah couldn’t figure out what to do about it.

Finally, he decided that Donkey Odie was old and used-up, and the
well needed to be covered up anyway; it just wasn't worth it to try to retrieve the donkey, even if he could figure out some way to do it..

“Fannie Mae,” he yelled inside for my grandmother. “Invite all the neighbors to come over for a cookout. Then I’ll get them to help me bury Donkey Odie.

After dinner, the fellows all grabbed a spades and began to shovel dirt into the well. At first, Donkey Odie realized what was going o and cried horribly. Then, to everyone's amazement, he quieted down.

A few shovel loads later, Grandpa Noah finally looked down into the well and was astonished at what he saw. With each shovel of dirt that hit his
back, Donkey Odie was doing something amazing.

He would shake it off and take a step up.

As Grandpa Noah’s neighbors continued to shoveldirt on top of the animal, he would shake it off and take a step up.

Pretty soon, everyone was amazed as Donkey Odie stepped up over t he edge of the well and happily trotted off!

Is that a true story, Grandpa Noah?” I asked him.

“About four or five pounds,” he smiled.

I like to think I got my sense of humor from Grandpa Noah’s side of the family.
Posted by Jack Sh*t, Gettin Fit at 6:26 AM