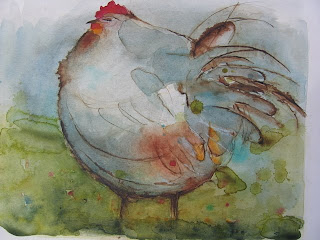 Chicken Not-So-Little was in her bathroom one day when she stood on the scale and saw that she had gained two pounds over the course of a week. It scared her so much she trembled all over. She shook so hard, half her feathers fell out.

So she ran in great fright to rejoin Weight Watchers. Along the way she met Carby-Barbie.

“Where are you going, Chicken Not-So-Little?” asked Carby-Barbie.

“Why don’t you just go on Adkins?” asked Carby-Barbie.

Carby-Barbie explained: “The Atkins Diet involves restriction of carbohydrates to more frequently switch the body's metabolism from burning glucose as fuel to burning stored body fat. This process, called ketosis, begins when insulin levels are low; in normal humans, insulin is lowest when blood glucose levels are low (mostly before eating). Ketosis lipolysis occurs when some of the lipid stores in fat cells are transferred to the blood and are thereby used for energy. On the other hand, caloric carbohydrates (e.g., glucose or starch, the latter made of chains of glucose) impact the body by increasing blood sugar after consumption. Lastly, because of fiber's low digestibility, it provides little or no food energy and does not significantly impact glucose and insulin levels.”

“Oh my!” explaimed Chicken Not-So-Little. “I didn’t understand a word you said.”

“What’s up, ladies?” asked Flexy-Lexy, who was on his way to the gym.

“Oh, help! The sky is falling!” wailed Chicken Not-So-Little. “I gained two pounds this week and I must go start eating nothing but meat right now!”

“No, no,” said Flexy-Lexy. “What you need to do is up your workouts, rev up your metabolism. It’s all about burning calories.”

“I don’t have to count points or eat an all-protein diet?” asked Chicken Not-So-Little.

“Nope,” said Flexy-Lexy. “You just need to hire me as your personal trainer and I’ll get you on an exercise plan that blasts off those pounds and many more.”

“But you won’t stick with that,” chided Carby-Barbie. “You’ll see quicker results with Adkins.”

“What’s got you confused?” asked Sh*tty-Witty, who happened to be passing by.

“The sky is falling!” cried Chicken Not-So-Little. “I gained two pounds this week and I must go start eating nothing but meat right now and work out all the time!”

“That’s silly, Chicken Not-So-Little,” said Sh*tty-Witty calmly. “You’ve been doing so well just eating more sensibly and exercising a little more frequently. Why not just keep doing what you’ve been doing and trust that the numbers will work themselves out in the end?”

“That’s very sensible advice,” said Chicken Not-So-Little, and so she went home and continued doing what she had been doing, eating more sensibly and exercising a little more frequently.

The next week, Sh*tty-Witty saw Chicken Not-So-Little running down the street and wailing as loudly as she could.