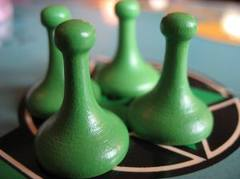 Every game has it.

The place you start, the spot you stand on before you make your first move.

And that’s where I’m standing.

If this were a Monopoly game, I’d be my favorite piece, the thimble (yes, the thimble!), shaking the dice in my hands and ready to roll doubles, then doubles again and then doubles one more time and… what? I have to go to jail just for rolling three doubles in a row? Well, then… if I’m stuck in jail, I’ll just use that time working out and getting in… huh? I can just pay $50 and get out. Well, why wouldn’t I do that? I mean, it’s just $50…

And if this were the game of Life, I’d be revving up my little convertible, and ready to fill my automobile up with a slew of baby-blue boy pegs and pretty-pink girl pegs. I’ve always wanted a large-peg family!

And if this were Clue, I’d be ready to guess the murderer already. Colonel Mustard in the Drawing Room with the Soap-on-a-Rope! Why is that my guess? Because I’m ready to get going, baby! Plus, Colonel Mustard just looks guilty!

And if this were Trouble, I’d pop the Popomatic popper and just keep popping until all the other players got super annoyed and left the room. Pop! Pop! Pop! Pop!

And if this were Candyland, I’d be prepared to count cards because, according to DataGenetics website, as cards are drawn, they are used and discarded and so the probability of which card will be turned up next is dependent on cards that have already been seen. To work through every possible combination of ways that the cards could be arranged in the deck is computationally infeasible.

And if this were Don’t Break the Ice, my strategy would be to not break any ice.

I am on Square One.