Speaking of which, did you know that there’s an alternative keyboard layout to the traditional “QWERTY” one? It’s called “Dvorak” (named after educational psychologist and professor of education August Dvorak). 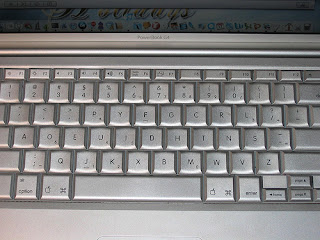 As you can see, the Dvorak keyboard has the most-used consonants on the right side of the home row, and the vowels on the left side of the home row. It’s set up to facilitate keying in a back-and-forth motion -- (right hand, then left hand, then right, etc.) which makes typing quicker, easier and safer (you’re less likely to suffer carpal tunnel syndrome and other repetitive motion injuries).
But I’m getting off track…

And getting off track is exactly what I seem to have been doing the last few months.

It started when my wife Anita informed me that our scale … my precious scale… was 10+ pounds off. Ten pounds off? You mean, it’s saying you’re ten pounds heavier than you really are?

I accepted the new number, but didn’t recognize it on my blog. I’ll knock that ten pounds off before I officially weigh in again, I told myself (which is the kind of thinking that usually gets a person in trouble).

So there I was, oh-so busy and traveling all over creation during October, then busy and… ummmm… slacking off in November. And December started kind of the same as I was blogging about Italy instead of focused on making some headway on my health and weight loss goals.

It was just a breakdown on the accountability front.

I may not be able to fix all my weight-related issues in the blink of an eye, but I can damn well be more accountable easily enough.

I usually wait until the weekend to weigh in, but somebody told me that there’s no time like the present…


Here’s to doubling-down on the commitment front, to recognizing problems then taking steps to correct them… and to fresh starts.
Posted by Jack Sh*t, Gettin Fit at 6:09 AM