For the next couple of days, Jack Sh*t is chronicling his adventures on his recent trip to Italy as well as including tips to help you plan your own international travel. It is his special way of saying "Nanna nanna boo boo, I went to Italy!" to all his loyal readers.

Our first dining experience in Cortona, Italy, turned out to be a lovely, up-scale restaurant that was just a slight bit unnerving because we were the only diners there. However, the food was fantastic, the wine was exquisite and the service terrific.

The next night, my wife Anita and I decided to try one of the city’s most popular places, a well-reviewed, don’t-miss spot that we (having not learned our lesson) haven’t made reservations for on a Saturday night.

But it’s way early, so we decide to give it a try right as the doors open. The owner/maitre d' is a friendly, garrulous godfather-sort, smiling broadly as we tell him our sob story about why we don’t have reservations (“We’re stupid!”).

He leads us to a table two feet away from where we’re standing, at the front door. With just the slightest hesitation, we give the wait staff our coats, take our seats and give an “it-all-worked-out” smile to one another. The waitress pours us some water and we start looking over the menu.

That’s when all kinds of crazy started to break out…

A group of would-be diners entered. Apparently it was some folks the owner knew, because they all stood there talking loudly and animatedly in Italian. Another couple entered and went to the bar, which was right on the other side of our tiny table. All of a sudden, it was as if we were sitting in a beehive.

Anita and I looked at one another, each of us getting more and more uncomfortable with the setting and realizing that it was only going to get worse as more people began arriving. However, considering that restaurants here charge a seating fee and no-telling-what for water, we were already on the hook.

It got louder and louder, until we finally agreed that even if the food was the best ever prepared, there was no way we were going to enjoy this meal. We were having the other kind of reservations, we told the waitress, who didn’t speaka the language. We wanted out!

The owner came over and made a big show of releasing us from our dining obligation. He was friendly enough, but there was a slight tinge of sour grapes that had nothing to do with the wine list.

Shaken slightly, we headed back to the restaurant we had enjoyed so much the day before, hoping we could finagle our way in on a busy Saturday night.

It turned out not to be a problem, as we were the only other diners once again. And once again, it was an outstanding meal (except, if I had it to do over, I probably wouldn’t order the sea monster).

Obviously, this was our place. 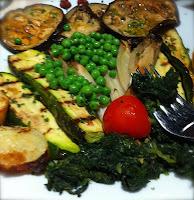 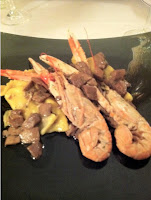