Is Santa Really White and Fat? 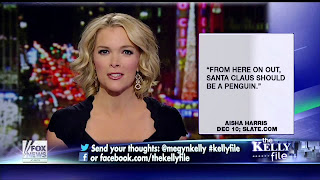 MEGYN KELLY: Have you heard about this piece that says Santa Claus shouldn't be a white man anymore? Or this really dumb blog post by this guy named Jack that says he shouldn’t be portrayed as fat?

KELLY: Yet another person saying it's racist to have a white Santa or fat-shaming to have a chunky Santa. By the way, for the kids at home, Santa just is white and his ass is bigger than a VW bug, but these people are arguing that maybe we should also have a black Santa and maybe a physically fit Santa. Santa is what he is and we are debating this because… well, it’s a slow news day.

JACK:  I know it goes against tradition, but wouldn’t it be nice for kids to see a Santa that took care of his body, who didn’t make his magic reindeer nearly have a stroke carting him around the world? Wouldn’t it be inspirational to see a St. Nick that could slide down the chimney with room to spare? White, black… I don’t really care.

JEDEDIAH BILA, Fox News contributor: She wants Santa to be inclusive. I had the same reaction. Initially I was thinking this is more politically correct nonsense, hyper-sensitivity in the culture. You realize if you were a young African-American kid and your Santa Claus was white, maybe you wouldn't feel a part of the tradition. She suggested a penguin should be Santa.

KELLY: I don't like to bad-mouth people, but she's nuttier than squirrel poo.

BILA: It's interesting to have an animal which is something that kids love, brings the cartoonish quality into it and makes kids feel welcome in the process.

BILA: I see where she was going.

JACK: Penguins carry a lot of belly fat. It has something to do with something Morgan Freeman said in that penguin movie.

KELLY: I have given her due on where she was going with it. Just because it makes you feel uncomfortable doesn't mean it has to change. Jesus was a white man, too. He was a historical figure. That's a verifiable fact -- as is Santa. I want the kids to know that. How do you revise it in the middle of the legacy of the story and change Santa from white to black. And then there’s Jack’s problem with the physical fitness nonsense.

MONICA CROWLEY, Fox News contributor: You can't. First of all, the penguin never would work. A penguin cannot do lunges. It’s physically impossible with their tiny little legs.

JACK: And what about bicep curls? They don’t even have biceps?

CROWLEY: You're right. Santa Claus is based on St. Nicholas who was a person, a Greek bishop, a white man who was terribly obese.

KELLY: Look. How can he be alienating?

CROWLEY: How cute is he? You can't take facts and try to change them to fit some kind of political agenda or sensitivity agenda.

JACK: I think that it's fine for Santa to be represented as a tradition white man, but I also think that if people want to represent him as an African-American male, a drag queen,  a serial killer, even somebody who enjoys reading my blog.

KELLY: You had to go there.

JACK: I don't think a society going to break up if people see a fit and trim Santa. See, here’s Santa with Michael Phelps' body
.
KELLY: Well, if he’s gonna look like that, we’re going to want to see him more than once a year. Wowza!