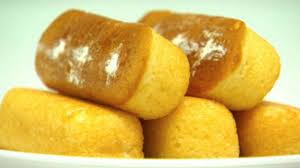 “OMG,” I screamed, rushing through the front then slamming it shut and throwing the deadbolt. “They’re back from the dead.”

“I’ve been warning you about the zombie apocalypse, Dad,” said my teenage daughter Pisa, putting down her book. “You’re safe though; zombies only eat brains.”

“It’s not zombies,” I shouted at my kind-of-funny but disrespectful-to-her-elders child. “It’s ten times worse!”

“Ten times worse than zombies?” asked Pisa incredulously. “Oh no… is it the Alabama cousins?”

“Worse than that,” I said, nailing some boards across the doorway. “Twinkies are back!”

“I thought they went out of business.”

“Well,” I explained. “They went bankrupt after an acrimonious fight with its unionized workers last year but they’re back up and running under new owners and a leaner structure. They plan to have Twinkies and other snack cakes back on shelves starting July 15.”

“You don’t understand,” I told her. “They’re Twinkies! They will just show up in our pantry when we least expect it. They cannot die!”

“What if we taught the zombies to eat the all the Twinkies?” she asked.