Why Losing Weight Is Harder For Men Than Women 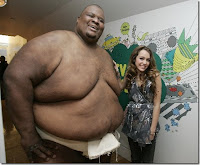 • Who ever heard of a “Hungry Woman” line of TV dinners?

• Men don’t have handy “time of the month” excuse to explain gains.

• Founding fathers guaranteed all men right to “life, liberty and the pursuit of chili cheese fries.”

• Fact that men paid more for same job as women means we have more disposable income with which to buy snack foods.

• Men stay incredibly sexy even when we’re grossly overweight (well, at least I do…)

• Guys are highly susceptible to “dares,” as in “I dare you to drink that entire pitcher of beer.”

• Women burn a whole lot of calories doing all the vacuuming and cleaning and laundry. How can men compete with that?

• Less is expected from men fashionwise; no one’s surprised when we wear sweatpants to a wedding (even our own).

• “Women have choices, men have responsibilities.” What does that mean? It means that I was watching the movie Parenthood while I was writing this.

• Men have it coded into their DNA to carry additional weight in order to survive harsh winter conditions and to keep our recliners from floating away.

• My wife Anita once lost over 10 lbs in a single day (yes, my daughter Holly was a big baby).

• Men have to deal with the “perception” that losing weight is harder for women because of “proof” offered by “research” conducted by “scientists.”