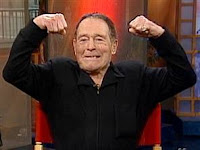 This post from last year started off as a silly little take-off of the Julie & Julia movie, but swerved into a new direction (as my blog posts have a disturbing tendency to do). In the process of writing it, I learned a lot of fascinating stuff on Jack LeLanne, who passed away this week at the age of 96. I never met Mr. LeLanne, but just like in that J&J movie, I'm pretty sure he would have hated my blog if he had been aware of it... or at least I like to think that he would have. Whip those angels into shape, Jack!

Okay, my wife Anita and I were watching that Julie & Julia movie where Meryl Streep plays the innkeeper and sings that catchy “Dancing Queen” song… okay, maybe I was watching a ball game on my phone during parts of it.

What did get my attention was the blogging bits. Julie’s excitement over getting her first comment (only to discover it was her mother) or the joy in attracting a small following.

Actually, it was a pretty cute flick, and Meryl really did capture the essence of Julia Child. The most unbelieveable part of the entire movie was the fact that the Julie character didn’t pack on 40 lbs while making all those creamy, buttery dishes.

I was thinking about that as I was at the gym resting between sets. Sometimes, my rest periods are… um… lengthy. Sometimes the attendants come by and make sure I haven’t slipped into a coma… or tell me that they’re turning the lights off now and going home.

So it didn’t surprise me when I got a tap on the shoulder in between my chest presses.

“Excuse me, son,” came a gravelly voice. “Are you gonna stay on that machine all day?”

“Wow, I used to watch your show all the time. What was it called?”

“No, that wasn’t it. Hey, what was the name of that white German Shepard you had?”

“I can’t complain…oh yeah, Happy. Is he still alive?”

“Well, dogs age seven years for every one of ours, so Happy would be about… ummm… 350 years old now.”

“Most doctors at the time warned against working out with weights. They believed it could cause a heart attack or ruin a man’s sex drive. Can you believe that?”

“Well, that hasn’t been my experience…”

“I bet you didn’t know that I devised a lot of the stuff you’re using now, like leg-extension machines and weights on pulleys for lifting?”

“That’s right, I was among the first to produce protein supplements and nutrition bars, too.”

“And beginning in 1951, I hosted and produced TV's first workout program.”

“Was it called Jack, Jack the Jumping Jack?”

“At first, the show aired only in San Francisco, and I had to buy all the air time myself. Stupid TV execs were sure nobody would want to watch me do exercises. But in just a few years, the program was nationally syndicated on ABC, where millions watched regularly, up until 1985.”

“Is that when you died?”

“I told you I’m not a ghost! Is something wrong with you?”

“Maybe… according to some of the emails I get…”

“I kept myself busy. In 1955, I swam from Alcatraz to San Francisco… while wearing handcuffs mind you. And in 1991, for my 70th birthday, I swam a mile while shackled to 70 boats carrying 70 people.”

“When I was a kid, I was addicted to sugar and junk food. But one day when I was fifteen or so, I heard an interesting fellow give a talk on health and nutrition. It really changed my life.”

“I want to be able to do things; I want to look good; I don't want to be a drudge on my wife and my kids. And I want to get my message out to the people. I might live forever…”