You’ll Go Down in History 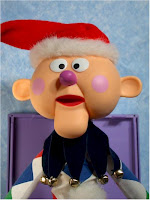 Unless you’re of a certain age, the story doesn’t resonate.

No, not the story of “Rudolph the Red-Nosed Reindeer”, dumbass. That story resonates with all God’s children.

No, I mean the classic story of “Jack Sh*t Having to Watch Rudolph the Red-Nosed Reindeer”.

I guess I was six or seven years old, and had settled in to get my Rudolph on. I was sitting there cross-legged, about two feet from the front of the set in my prime TV-watching position. The show started in an hour-and-a-half, and I wasn’t going to miss one second of it.

I was so engrossed in my TV watching that I didn’t notice my parents packing the car, didn’t pay any attention to them getting their coats on, ignored them when they called out “Jack, ready to go?”

“Whaaa?” I moaned confusedly, and my mother Shirley patiently explained that we were making the two-hour drive to see the grandparents.

“Huh?” I moaned, and she reached down and flicked the television set off. “I told you we were going this weekend,” she said. “Now go get in the car right now.”

This is the part of the story that my own kids don’t understand.

“Why didn’t you just set it to record on the DVR?” asked Pisa, my 10-year-old daughter.

“Didn’t you own a copy of it if you liked it so much?” asked Holly, my 17-year-old daughter.

It never ceases to freak them all out to hear about our TV watching habits in the olden days. Yes, if you wanted to watch a show, you had to sit there when it came on and watch it right then and there. If you missed it, you… well, you missed it.

So cut back to that brave young lad in the backseat of his father Horace’s Oldsmobile. Did he take this disappointment with courage and good grace? With understanding and a discernment that belied his young age?

I’m not ashamed to admit that I cried a little, and by “a little,” I mean for 45 minutes at maximum volume and intensity. We had crossed the state line and I was still wailing like a banshee. Horace was threatening to veer into oncoming traffic if I didn’t stop, but Shirley was getting worried.

“I WANNA WATCH RUDOLPH!” I sobbed, and even my younger sister was starting to get upset.

My parents were only human, so about five minutes later, Horace testily pulled the Olds into a big sweeping U-turn and we headed home. My cries began ratcheting down the closer we got to the living room TV set.

We pulled into the driveway with three minutes to spare, and Shirley sat my butt right back in the spot I had so happily previously occupied.

“YOU ARE GOING TO SIT RIGHT THERE,” she sneered menacingly. “AND YOU’RE GOING TO WATCH EVERY COTTON-PICKIN’ SECOND OF RUDOLPH!”

I simply smiled back.

Since that night, each year I get a call from my mother whenever “Rudolph the Red-Nosed Reindeer” is on network TV. She call to to remind me that it’s on, and warns me I had better have my ass in a chair in from of that set and watch every cotton-pickin’ second of it.

I like to think that I get some of my determination from Mom’s side of the family.
Posted by Jack Sh*t, Gettin Fit at 6:59 AM