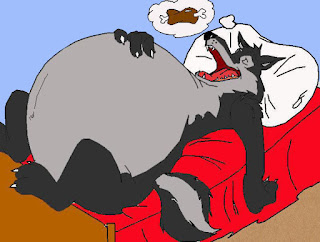 Once upon a time, a cute-but-kinda-chubby young girl was traipsing through the woods with a basket of fat-free goodies. She was on the way to visit her grandmother, who was in bed suffering from a multitude of symptoms relating to her pulmonary problems and Type 2 diabetes. Apparently, obesity was a tradition in Little Red Dieting Good's family.

Since I’m a sucky narrator, I forgot to mention that Little Red Dieting Good had run into the Big Fat Wolf soon after setting out from her little village. Even though the Big Fat Wolf was particularly vicious, Little Red Dieting Good wasn’t afraid because she knew she could easily outrun the corpulent carnivore.  Well, as you can probably guess, the Big Fat Wolf utilized his smartphone’s GPS and navigated an effective shortcut to the grandmother’s house.  Somehow, the Big Fat Wolf got rid of the grandmother and dressed himself up in her cap, glasses and nightgown. Okay, I could have done a better job of narrating that bit, but I was sick a lot during Narrating School and missed the week when they were going over that part of the program.

Anyway… skip ahead to when Little Red Dieting Good shows up to the cottage, because that’s the part that really gets interesting anyway. Some narrators just get so caught up in describing things that you just get tired and cranky and want to scream “Just get on with it anyway!”

“Grandmother!” exclaimed Little Red Dieting Good. “What big teeth you have!”  Okay, when I was making that observation about how crappy some narrators are, I seem to have skipped over some pretty important stuff in the story, so excuse me while I backtrack and try to find my place. It won’t take long…

Once upon a time… dammit! Too far back…

“Grandmother!” exclaimed Little Red Dieting Good. “What big teeth you… waitaminute… let me start over:  once upon a time…”

“Pleeeeease,” whined Little Red Dieting Good. “Can we get on with this. I’ve got Zumba at 6 o’clock.”

“That does it!” I said, storming off. “Let’s see just how far you get without a narrator!”

“Oh, Grandmother. What big eyes you have!”

“The better to see you with, my dear.”

“Oh Grandmother. What a big snout you have!”

“The better to smell those tempting treats you’ve brought me!”

“Oh Grandmother. What a big fat ass you have!”

“I’ll say! You got more crack than Humpty Dumpty.”

“Well, those are fat-free treats, aren’t they?”

“Yeah, and take this granola. Low-fat granola is indeed lower in fat; however, it’s only approximately 10% lower in calories. It won’t take a lot of mindless munching to scarf down ten percent more granola.”

“Okay,” I said. “I can see this story is getting off track without a narrator's deft touch, so I came back to instill some much-needed order, and… hey where are you two going?”

“We’re going to Zumba class,” explained the Big Fat Wolf, taking off the nightgown and slipping on a pair of ragged sweatpants. “I’ve got to do something about this fat ass.”

“Come on,” smiled Little Red Dieting Good. “We’ll have you huffing and puffing in no time.”