Jack:  You're a first year weight loss blogger. You just got finished readin' some Volumetrics dietician – Barbara Rolls probably. You're gonna be convinced of that 'til next month when you get to gastroenterologist Walter L. Voegtlin, and then you're gonna be talkin' about the paleo diet and how modern human populations subsisting on traditional diets allegedly similar to those of Paleolithic hunter-gatherers are largely free of diseases of affluence.

That's gonna last until next year -- you're gonna be in here regurgitating Atkins, talkin' about how, you know, the low-carbohydrate diet produces a metabolic advantage because burning fat takes more calories so you expend more calories.

Clark: Well, as a matter of fact, I won't, because Atkins drastically underestimates the fact that all-cause mortality rates were increased in both men and women who were eating a low-carb…

Jack: Atkins drastically -- Atkins drastically underestimates the fact that researchers found that all-cause mortality rates were increased in both men and women who were eating a low-carbohydrate Atkins diet based on animal protein. You got that from Dr. Dean Ornish, Preventive Medicine Reseach Institue report' page 98, right? Yeah, I read that too. Were you gonna plagiarize the whole thing for us? Do you have any thoughts of your own on this matter? Or do you...is that your thing? You come into a blog. You read some obscure passage and then pretend...you pawn it off as your own idea in the comment section just to impress some visitors and embarrass my readers?

Jack: See the sad thing about a guy like you is in 50 years you're gonna start doin' some thinkin' on your own and you're gonna come up with the fact that there are two certainties in life. One: don't do that. And two: You dropped a hundred and fifty bucks at freakin’ Amazon when you coulda' gotten the same info on my blog for free.

Clark: Yeah, well, if you don't make any money on your blog, I guess you'll be serving my kids fries on our way to a ski trip.

Jack: Yeah... well... they'll be baked fries. How do you like them apples? 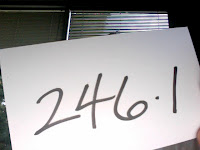 Finally kicked this cold in the ass. Time to get back to work...