Where the Wide Things Are 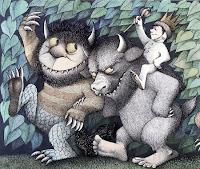 The night Jax wore his sweat pants and ate snacks of one kind and another. His wife called him “WIDE THING!” and Jax said “I’LL EAT THIS UP!” so he was sent to bed without getting any.

That very night in Jax’s room a fitness center grew and grew and grew until his ceiling hung with exercise equipment and the walls had mirrors all around and an opportunity tumbled by with a private trainer for Jax.

And he started exercising through night and day and in and out of weeks and almost over a year to get away from where the wide things are.

And they called him the most wild wide thing of all and made him king of all wide things.

“Now stop!” Jax said and sent the wide things off to bed with only 850 calories worth of supper.

And Jax the king of all wide things was tired of being so wide and wanted to be fittest and healthiest of all.

Then all around from far away across the world he smelled good, healthy things to eat so he gave up being king of where the wide things are.

But the wide things cried, “Oh please don’t go… we like you being as fat as we are!”

…and into the night of his very own room where he found his wife Anita waiting for him.

And she was still hot. 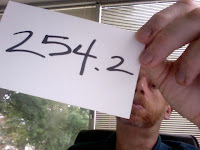 Scale and I seem to have come to an understanding...
Posted by Jack Sh*t, Gettin Fit at 6:00 AM