Bodfather: A Summons to Appear 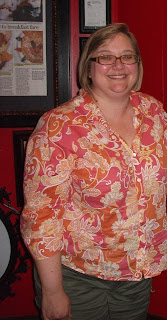 I guess it comes from my personal lawyer, who sent me a bill the other day for crossing the street and talking to somebody that he thought was me.

So when I agreed to take on Laurie as part of my “Bodfather” program, my plan was to tell her to eat cupcakes six times a day and watch nine hours of television daily.

But then I started learning more about Laurie’s story.

“You know I was thin at one time,” she confided in me.  “My grandmother was obese. My aunt was grossly obese (I think that's the term). I saw my aunt about three years ago and her first words were 'I knew you’d eventually get fat.’”

Then she went into hiding. For the next couple of years, Laurie avoided seeing anyone that knew her from back when was thin, including her own family.

From there, she tells me, she spent a year in defiance.  “Yeah I am fat,” she proclaims boldly. “What of it?”

What of it indeed? Not caring what others think is one thing, but when it’s so obvious that obesity is taking its toll on your quality of life, well… that’s a different story.

“It’s about the aches and pains,” says Laurie. “It’s about the fact that my knees hurt or my back aches.  Or I can't go up one flight of stairs without huffing.”

So Laurie decided to represent herself, decided that now’s the time to take control of her own future.

However, and… well, you probably already know this:  it’s difficult.

“I can feel the excuses start around 2 p.m.” she told me. “ Candy = energy.  Hamburger = being good to myself.  Ice cream = yeah, you leave the ice cream out of this.  Ice cream never hurt anyone, ice cream loves me...okay, scratch that.”

So, it’s not easy. I’ll tell you like I told Laurie: it’s not easy for any of us. Some may make it look easy, but I promise you that it’s not.

“Am I certain I will follow-through?” she continues. “No, I am not. But do I want to stop with the excuses?  Yep. Would I like someone there cheering for me? Yes, that would be pretty awesome.  Do I want someone there to ask the hard questions? Yep. It’s not about shame or guilt;  it’s about taking responsibility.”

Laurie’s story reminds me of the man who had been caught embezzling millions from his employer. He goes to a lawyer, telling him that he really, really doesn’t want to go to jail. But his lawyer tells him, "Don’t worry. You’ll never have to go to jail with all that money.” And the lawyer was right. When the man is eventually sent to prison, he doesn’t have a dime.

Okay, that doesn’t really remind me of Laurie’s story, but if I’m going to be working with a lawyer here, you’re gonna have to expect a few lawyer jokes along the way.